couple of things. first off art is on fallon tonight. hes always good on the late shows show i look forward to it. ill post the youtube when its up. he tweeted this pic thats kinda cool. 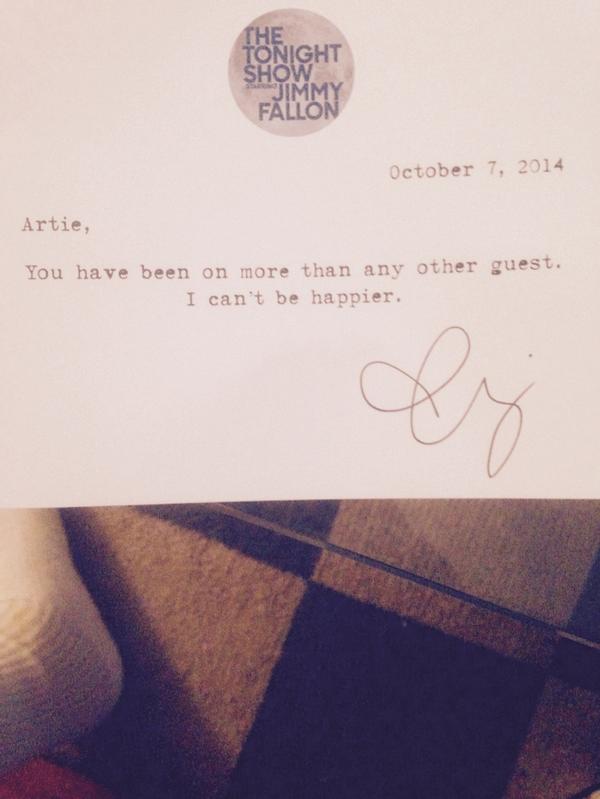 next art has been on fire on twitter. he goes on these rants about all sorts of stuff and they can last like 20+ tweets and most every one is funny and worth the read. he is really worth following if u dont already.

also he has announced that he will start a podcast around xmas. this i cant wait for! i really enjoyed his sports radio show and that was censored bs and still very good. he said that the podcast will be with a few friends so that should be cool. he recently broke up with his girl/fiance and i really wish he was still on the air to talk about it.

I totally missed it. I *knew* I should have DVR'ed it when I was thinking about it.

I'm sure he talked about Jeter.

I saw the last half. I wasn't 100% sure if he got cut off because of his last joke, or if he was watching his time and dropped the joke at the perfect moment.

I forgot the joke, but I was laughing.

That clip made me miss him on THSS. Even if he just called in once a month, that would be good.

Fallon only has Artie on for about 5 minutes anyway. That's all that can be stood by someone like my mother. Later I'll get a call about that fat guy that used to be on Stern's show was on our saintly Fallon show talking about jerking off.
Reactions: HecticArt

That was it. The mental patient line. Hysterical.

Actor, comedian, and radio personality Artie Lange broadcasts live from Comedy Central Radio this Friday! Join Artie as he takes calls from listeners and plays tracks from his favorite comedians. He will also be sharing clips from his new stand-up special The Stench of Failure, which premieres October 18 at Midnight ET on Comedy Central. In addition, Artie will be joined by surprise guests—tune in and find out who will be stopping by!
Click to expand...

I would love Artie to come back to the Stern show as a guest. But he looked kind of strange (white). I wish he would get healthier.

art is on sirius now.

Art is about to start his own Uncensored Podcast soon as well.

Early rumors are that he will charge for downloading it, but it will be uncensored Artie, the one we all loved on the Stern Show. The ISDN line is already being installed, per his twitter.

yea he was talking about charging on twitter a few days back. im sad to hear this but ill most likely wind up paying for the show. i really love art on the radio and a few bucks a month would be worth it to me.

also i always thought an isdn line was to connect from a remote location to the studio. like howards home to the sirius building. i dont think its needed for a podcast. but i really dont know the tech stuff.
Reactions: Ehilbert1
H

What is the normal going rate for a podcast download?

Needless to say, I don't download anything I need to pay for. Times are tough. If your show is good enough, the sponsors will come.

there is only one podcast ive ever paid for. its jimmy pardo's never not funny. it has since gone free on earwolf but i used to pay $10-15 per 6 month period for 1-2 shows a week.
H

JHDKoopman said:
there is only one podcast ive ever paid for. its jimmy pardo's never not funny. it has since gone free on earwolf but i used to pay $10-15 per 6 month period for 1-2 shows a week.
Click to expand...

art is on seth myers tonight.

Thanks. Me and math don't get along.

art is doing an AMA right now. check it out:

I am actor and comedian Artie Lange. You might recognize me from The Howard Stern Show, my twitter account @artiequitter, two bestselling books, or my latest comedy special on Comedy Central &quot;The Stench of Failure.&quot; AMA. : IAmA

Saw Artie on Seth Meyers last night. Best I can sum-up is to say it made me uncomfortable. He's clean now (nothing wrong with that), but he's got this really unhealthy-looking pasty fatness, and his voice is so gravelly, it's hard to listen. He also sported a cheesy hair dye job.

All his bits and stories revolved around how utterly fucked-up he was, to the point that it went from being funny to sad and unrelateable to us non-strung-out folk. I also felt bad for Meyers, who tried his best to move the bit along, as Artie's stories often had no real conclusion or punch-line.