I've always maintained that July was the worst month of the calender for sports fans. Yeah, you got some Golf, the Tour De France and the Baseball All-Star Game, but not much else.

Oh yeah dont forget about the new United Football League which will launch in October and they will have some rules that are different then the NFL UFL Rules: Dancing Permitted, No Tuck Rule Among Highlights -- NFL FanHouse most notable both teams will have a possession in OT.

Here's something to keep you busy, if only for a minute or two. The new Madden ratings are out for the 2010 version of the video game. Andre Johnson is the highest rated Texan with a 98. I think Mario Williams was short-changed a bit with a 95.

The CFL is up and running. Go Riders. Go Argos.


Comment Email Print Share
By Pat Forde
ESPN.com
Archive
A source close to the situation confirmed to ESPN.com Friday that Army and Notre Dame will play the first football game at the new Yankee Stadium in 2010.
Army issued a release Friday afternoon touting a "major college football announcement" Monday at the stadium. The announcement will be a game against the Fighting Irish, said the source, renewing a once-vibrant New York City tradition.
Notre Dame senior associate athletic director John Heisler could not confirm that the game is a go, but did not dispute it, either.
"We've talked for some time about our interest in playing in Yankee Stadium, and Yankee Stadium has expressed an interesting in having us play there," Heisler said. "We're very close to having something happen."
Notre Dame athletic director Jack Swarbrick told the Associated Press the negotiations were far along, but would not acknowledge a completed deal. He said such a matchup would be a home game for the Fighting Irish, meaning it would be broadcast on NBC.
"There are still things to be resolved," Swarbrick said.
Notre Dame still has two dates not scheduled for next year, including one home game.
Army and Notre Dame played each other at Yankee Stadium annually from 1925-46, with one of the two schools being ranked No. 1 each of the last four meetings at the famed baseball park. The most famous of those games probably was the 0-0 tie in 1946, when Army was ranked No. 1 and Notre Dame No. 2. The two teams last met at Yankee Stadium in 1969.
The Times Herald-Record, citing unidentified Army sources, said Friday that Army will also play games at Yankee Stadium in the 2011, 2012 and 2013 seasons. 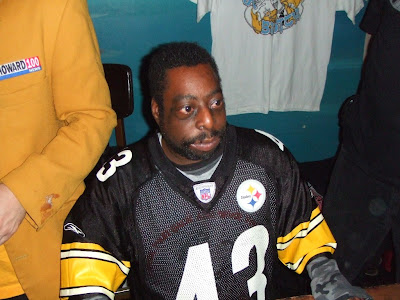 The first preseason game is a week from today... I'm just saying.

And my favorite team is playing! I can't wait.:churn:

The SIRIUS NFL Team broadcasts live from the Giants camp to get an early read on the upcoming season. Hear special one-on-one interviews with players, coaches, the front office and much more.

I'm definitely looking forward to NFL time!!! I just wish my tickets would get here already.

I think the time between the end of March Madness and baseball opening day is the most boring time in sports.

It's almost time for PREDICTIONS!

Side note...as of today, we're officially one month away from college football :drool:

Side note...as of today, we're officially one month away from college football :drool:
Click to expand...

Holy Smokes! I just heard the first preseason game is this sunday night.