The Good Things Drivers Do

Truex Jr. donates 100 Dover tickets to fans in need - #1- Martin Truex Jr., always a fan favorite at the Monster Mile, has purchased 100 tickets to the AAA 400 Sprint Cup Series race for select fans who were unable to renew their September race tickets due to hardships brought on by the economic downturn or other unforeseen circumstances. Loyal Dover International Speedway ticket holders were contacted and told of Truex's special donation of tickets to the upcoming "Chase for the NASCAR Sprint Cup" race. The list was compiled from letters or personal stories shared by fans during the ticket renewal period for the Sept. 25-27 race weekend. "When we heard that Dover had a list of fans who wanted to come to the race but couldn't for one reason or another, we decided to take care of them," said Truex, driver of the #1 Bass Pro Shops Chevy in the NASCAR Sprint Cup Series.

That's putting your money where it counts. And I'm even MORE of a fan of his now because of it. I hope he makes the chase next year. (regardless, I bet his crew chief will feel like he's on vacation... )

The NASCAR Jail & Bail charity event will be held for a second time in the Charlotte, N.C., area as part of the lead-up to the mid-October race weekend at Lowe's Motor Speedway.

After they are locked up, money for the scholarship fund will be raised through "bail."

Davis, an official in NASCAR's Sprint Cup Series, was killed in a traffic accident last year. She was 28. The scholarship fund is intended to assist female students at Universal Technical Institute campuses. Davis was a UTI graduate.

Tickets for the event, which will also feature food and music, are on sale now for $10 and at the gate the night of the event. To register for tickets or to learn more visit wwwWWW.NASCAR.COM/foundation.

An online charity auction featuring the jail shirts worn and signed by each participating driver along with autographed NASCAR memorabilia will go live Oct. 15 at 12 p.m. ET and run through Oct. 22. For more information visit NASCAR.

In the humid stillness of Arlington National Cemetery on Thursday afternoon, #88-Dale Earnhardt Jr., #24-Jeff Gordon and team owner Rick Hendrick solemnly walked down a set of stairs toward the Tomb of the Unknown Soldier. They lined up, along with a member of the military honor guard who ceremonially patrol the tomb, and then stepped forward together to place a wreath in front of the giant marble structure. Hands over their hearts, they stood silently amidst the quiet of the cemetery where more than 330,000 men and women are buried. A few minutes later, in the basement of a nearby building just down the hall from the guards' quarters, the two National Guard-sponsored drivers reflected on the magnitude of what they had just experienced. "I was just nervous," Earnhardt Jr. said. "I get real nervous around appearances, but this one was real heavy. There's a lot of responsibility, and that was definitely the case for this." Like Earnhardt Jr., Gordon had never visited Arlington before and said he regretted not doing so earlier. "This is something I think every American should experience," Gordon said. "The peace, the security that we feel in the safety of our country is because of the men and women here at Arlington."

DP thanks for posting that link. As father to three children with military connections, I certainly appreciate things that people do for our servicemen and women. There was a group that visited Walter Reed yesterday as well.

foyt said:
As father to three children with military connections, I certainly appreciate things that people do for our servicemen and women. There was a group that visited Walter Reed yesterday as well.
Click to expand...

Here's a story on Ryan Newman's visit to Walter Reed.....

A SOLDIER'S LIFE AT WALTER REED: RYAN NEWMAN SEES THE OTHER SIDE OF THE STORY

DOVER, Del. Ryan Newman, whose team is sponsored by the U.S. Army and who spent Thursday on an emotionally wringing visit to Walter Reed Medical Center in nearby Washington, D.C., says he's talked with Army officials about a tour of Iraq, to visit troops in the field.

"It's a matter of logistics - it takes a day over and a day back, and there are only so many days in the week, but we've talked about doing something like that, probably in the off-season," Newman says. "It's just a matter of timing. I would be interested in doing it (going to Iraq), and would be interested in seeing it. Obviously it's not the best place to go visit. Disney World would be really cool too. "But going to see the troops would be what I would be there for, and it's just a matter of aligning it right in the off-season, so it can be effective and efficient for everybody. I don't want to go over there and see three people and spend a day in an airplane coming back.

Edwards, Bowyer to race for Victory Junction - #99-Carl Edwards and #33-Clint Bowyer will contest a race within a race when they compete in the Price Chopper 400 Sprint Cup race at Kansas Speedway. Sprint announced a Stateline Challenge between Edwards, of Columbia, Missouri and Bowyer, of Emporia, Kansas. Sprint will present a check for $100,000 to Victory Junction Midwest in the name of the driver who finishes higher in the race. A $25,000 donation will be made in honor of the other driver. All proceeds from the race will help fund construction efforts for Victory Junction.

I went there with my parents as a kid...I bet I was 8. I still remember that like it was yesterday. It really sinks in when you visit that place and the other areas around there.

Sadler to host some special guests - #19-Elliott Sadler is hosting some very special guests at the racetrack this weekend at Kansas Speedway. The 34-year old Emporia, Va. native is hosting three Army servicemen that will soon be re-deployed back to the Middle East. The men contacted Sadler several years ago via the internet prior to a previous deployment and wanted to try to meet him at a race just prior to their departure, unfortunately the meeting never occurred as their deployment was moved up several weeks. Once the men returned from active duty, Sadler finally set up a meeting with them at a race in Talladega. Now, as the three men prepare to venture back oversees, Sadler is planning to host all three for a VIP race weekend during the Chase for the Championship at the 1.5-mile Kansas Speedway.

Sadler says: "I'm looking forward to hosting SFC Gilliam, SSG Babineaux and SGT King. These guys are huge NASCAR fans and Elliott Sadler fans. They got in contact with me several years ago over the Internet and we've stayed in touch ever since. Hopefully this is a nice little going away present for them this weekend. Everyone that knows me realizes I'm a huge supporter of our military. These guys fight for our freedom everyday and this is a chance for me to say, Thank you!"

Tony Stewart is the third quarter recipient of the NMPA Speedway Motorsports Sprit Award. The award is designed to recognize character and achievement in the face of adversity, sportsmanship and contributions to motorsports.

Stewart was honored based on his numerous charitable acts. His second annual fantasy camp at Texas Motor Speedway in early August raised more than $175,000 with proceeds going to Speedway Children's Charities. 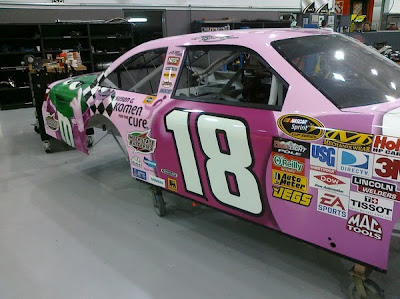 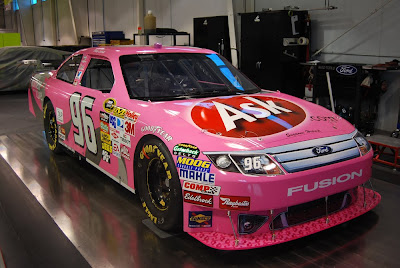