You are using an out of date browser. It may not display this or other websites correctly.
You should upgrade or use an alternative browser.
D

New member. I assume this is the right place to post this problem report, but I may be wrong. If there actually is a "tech support" place for Stream_ON please advise.

I have emailed the author, but I'm not sure the product is actually supported officially.

Anyway, from what I've been able to gather the proper window for the Player is supposed to look like the following: 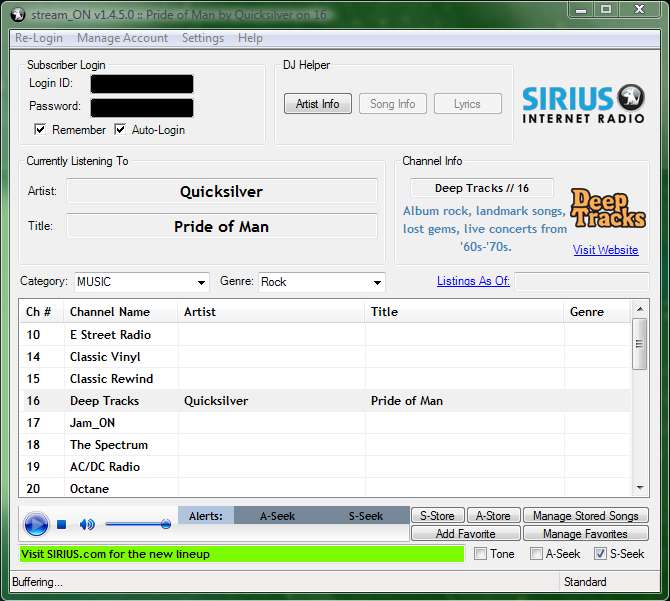 However on my Windows 7 Pro x64 system, with my font size specified as 125%, the Player window looks as follows: 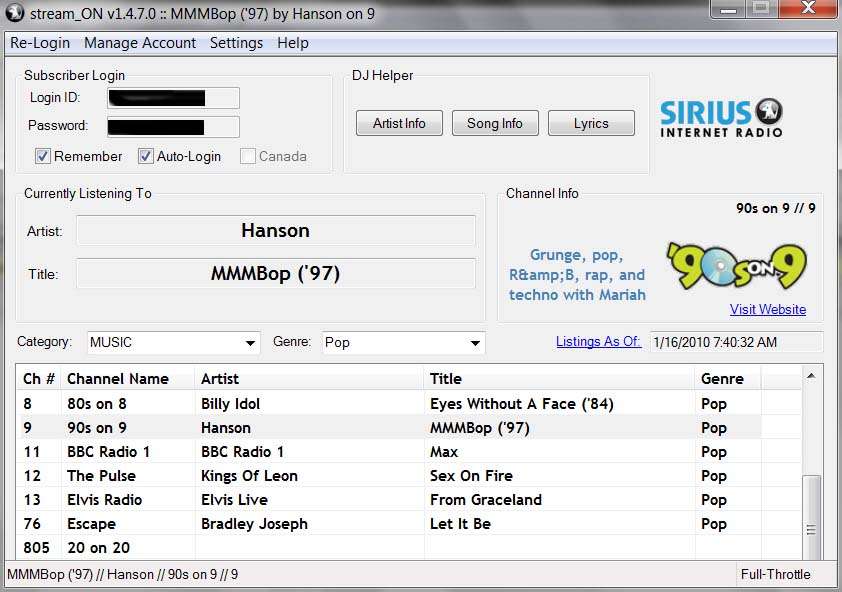 Note that the whole bottom of the window is not even presented.

Is anybody else running Stream_ON successfully under Windows 7 Pro X64 with fonts at 125%? Same problem I'm seeing? Or does it work fine for you?

So, I suppose I'll have to live with (a) no Favorites... which might have been nice, and (b) no Volume control slider. However Win7 provides an individual Mixer volume control by application, so I can just use that approach to control volume when playing Sirius via Stream_ON.

I've emailed the author about this problem. Maybe someday it will be fixed. I suspect it shows up identically in WinXP, where the equivalent is "normal fonts (96DPI)" vs. "large fonts (120DPI)" in Display Properties -> Settings -> Advanced.
X

Lots of applications dont display properly with 125% text size. I think some of it can even depend on what video card and drivers a user has.

Have you tried installing/running it in "xp compatibility mode" ?
D

Lots of applications dont display properly with 125% text size. I think some of it can even depend on what video card and drivers a user has.
Click to expand...

I'm long familiar with this issue. I've long endured applications that I love and have used despite their "GUI defect" for many years (first under Win98, then WinXP, and now Win7) which were written seemingly unaware that there even was such a thing as "large fonts (120DPI)". Clearly the developer ran at "normal fonts (96DPI)" and never realized that standard Windows could visibly enlarge EVERYTHING by 25% at the user's request, and that this would require that all fixed-size windows and/or text presentation areas drawn by the developer in the application would need to be comparably enlarged to make room for the larger fonts.

In the case of Stream_ON which I just stumbled upon yesterday (after discovering that the Sirius Player Yahoo Widget no longer worked... either under WinXP where it used to work or under Win7 where I don't know if it ever worked), it's now quite obvious that the Stream_ON window problem is caused by the fact that the application window is drawn as FIXED SIZE. It is NOT drawn as RESIZABLE, and it's fixed size is not increased by 25% to adjust to the fact that everything inside of it has been increased to be 25% larger by Win7 itself (and my Personalization -> Display -> fonts 125%).

See my own reply above... with the screenshot after temporarily reverting to 100%. The Stream_ON window now looks perfect and complete, with all controls visible as they should be.

So the application fixed-size window problem has been "solved" by forcing me to run Win7 at a font size that I do not want to run at.

This is not an acceptable "solution" to me, and the program itself simply needs to be corrected to either (a) allow the window to be resizable and include scrollbars, so that I can myself stretch it to be large enough to present everything drawn, or (b) just increase the overall size of the fixed-window by 25% (or even 50% since that's allowed by Win7 as well, if that's what the user specified in Personalization) in order that everything gets presented as intended.

Again... I'm well familiar with this font size issue and its effect on applications such that they produce "mal-formed windows". Anomalies such as truncated or incompletely displayed text, lopped off buttons and controls, parts of the GUI that simply do not even appear (as here, with Stream_ON) etc., are typical. It is not new or unique to Win7, nor is it unique to Stream_ON.

However it is definitely an application problem, and the developer needs to be made aware that there is such a thing as "large fonts (120DPI)" in WinXP and there is such a thing as "font size 125%" and "font size 150%" in Win7 and that these are "standard" Windows options supported by the operating system. Accommodating the corresponding need for larger window size and imbedded text, controls, buttons, etc., is the right solution... whether doing it through scroll bars and a resizable window, or simply by drawing everthing corresponding larger.

Anyway, I will learn to live with it and its defect at 125% because I like the app and want to listen to Sirius online. Hopefully the author will perhaps someday fix the program.


Have you tried installing/running it in "xp compatibility mode"?
Click to expand...

This isn't the issue. It runs just fine as a "native" Win7 program.

The problem is that is fixed-size non-resizable window is simply too small when its entire inner contents have been enlarged by Windows to be 25% larger than the developer anticipated in the programming, thereby unexpectedly losing 25% (more or less) and some crucial onscreen controls and features as my screenshot of the malformed 125% window shows.
Last edited: Jan 16, 2010
D

Note that the screenshot of my "working" window (at 100% font size) shows a fixed-size non-resizable window size of 660x592 (with no scroll bars). Presumably this is the fixed size as drawn by Stream_ON itself.

Now also note that the screenshot of my "defective" window (at 125% font size) shows a new fixed size of 842x592. Grown BY WINDOWS in the horizontal direction but NOT in the vertical direction!

Apparently, Windows has increased the HORIZONTAL size of the window by just over 25%... presumably to accommodate the fact that text (drawn left-to-right) would obviously be 25% larger at a 125% font size Personalization.

But it may well be either (a) a problem with Windows itself, or (b) a design decision within Windows itself, to NOT simultaneously increase window size (and everything else inside that window, including non-text items) BY 25% IN THE VERTICAL DIRECTION AS WELL!

Anyway, regardless of who is really and fundamentally at fault here, the developer needs to realize that this is what happens at 125% (not to mention at 150%) and adjust the window creation process accordingly, if those Personalizations are in effect. Same with "large fonts (120DPI)" under WinXP.