You are using an out of date browser. It may not display this or other websites correctly.
You should upgrade or use an alternative browser.
R

I've had my Starmate One for over 3 years and recently the display has been drifting in and out. If I tap on it it will flicker and come back on. Is this a servicable problem or the beginning of the end??

Thanks for any help/info! 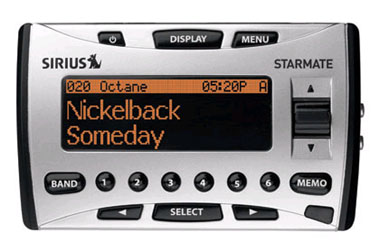 I am guessing it's time to get a new reciever. I have one also, and it has also been around fora few years and the audio is messed up, it's just a problem I can't fix. I am guessing this is also the case with you, unless you can purchase a new (probably refurbished) one from ebay or maybe tss-raido.com and take it apart and switch the display, or even easier, just swap the service to a new one...Or, get a newer cheap one that isn't a starmate if you don't mind changing setups.
Reactions: semipenguin
R

Grupsaar
Will any of the newer units fit the slotted bracket that my old Stamate1 slides into? I lug this thing into 2 cars and myoffice, alll setup with simple slip in mounts. TSS sellls a refurbished ST1 one for $20. Thinking to just buy that and be done with it (???)

If you are not interested in getting new docks, etc... go with that radio from TSS like you suggested.
R

I'm still trying to figure out if a new unit (ie: starmate5) has a thing like this on the back. I see the docking station that it comes with and have read about some problems people have had with it staying attached to the dock in the car. Also, from the looks of the PDF manuals, the suction cup mounts DO feature a female slot to fit the male shown here. I just cant get any BACK view of any of the new radios to see if it would slide right into the mounts I currently have. I've checked Sirius's site, TSS and all over EBAY for photos.

Also, it appears from the owner's manuals that all connections (power, antenna, aux out) are made into the dock, not the receiver, I guess this would make it necessary to have a dock in each car but eliminates the need to plug three things into the receiver when you move it from one location to another.

Just remember that the ST5 uses a 5v power cord and the ST1 uses 12v. You can use the same antenna.

Yeah, there are different connections for the newer radios. I do know for a fact that the Starmate replay and Xact STR7 use the same mounting plate that slides on the back, though, I've owned all three radios and used the same slide in plate for all of them. But none of these radios are really that much 'newer' except the Starmate Replay is much nicer in the aspect of getting to pause, rewind, etc. I also think its one of my favorite in car radios I've owned. Also, it uses the same power cords and such, so that'd be an easy upgrade route without re-doing the whole setup.
You must log in or register to reply here.
Share:
Facebook Twitter Reddit Pinterest Tumblr WhatsApp Email Share Link
Top Bottom