[Indy car driver] Milka Duno will make her stock car debut during the ARCA Racing Series presented by RE/MAX and Menards open test at Daytona International Speedway December 18, 19 and 20, 2009. Milka will participate in the test behind the wheel of Braun Racing's #90 Toyota. While no stranger to the Daytona Beach, FL-based track, this will be Milka's first opportunity to go around the 2.5-mile tri-oval in a metal-skinned stock car. Her #90 Camry will have less downforce than either the IndyCar Series cars she's driven the past three seasons, or the Rolex Series Daytona Prototypes that she competed in for the three seasons before that. With a second-place finish in 2007, Milka holds the record for the highest finish ever by a female driver in the 45-year history of the 24 Hours of Daytona at Daytona International Speedway. Starting with her four-win season in the American Le Mans Series in 2001 and continuing through her thee-win Rolex Series years, Milka has been offered opportunities to compete in stock cars and in the NASCAR Series virtually every season since.
Click to expand... 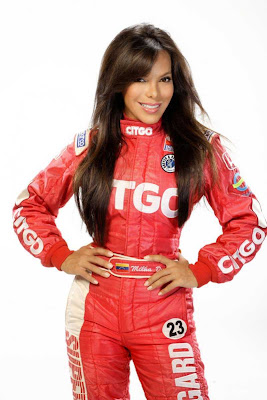 Milk and Donuts needs to get right out of the racing industry all together...

Has she ever finished on the lead lap in an IndyCar race or should I say even finished period?

Sirius01_8 said:
Has she ever finished on the lead lap in an IndyCar race or should I say even finished period?
Click to expand...

She has never finished on the lead lap in an Indy Car race. She has only finished 15 of 27 career races in the Indy Car Series. Her average finish is 19th in a series that generally starts a car count in the low 20's.

Here's a link to her stats..... Milka Duno Career Statistics