General Motors Company recently announced a step forward in the world of the connected car. The company plans to roll out 4G enabled cars in 2014 teaming up with AT&T Inc. as its service provider. Analysts at Piper Jaffray estimate GM represents ~25% of Sirius XM Radio new subs with an 18% market share US.

The development of the connected car could be a driver of growth for Media and Telecom as the average American spends almost 17hrs per week in their car, eclipsing only human essentials like sleeping (60hrs), working (43hrs) and watching TV (35hrs). Pipper expects SIRI to weather this threat by broadening its product offering and competing on content availability. We detail the main points about General Motors Company's new announcement and how Piper believes it will impact Sirius XM Radio Inc.

General Motors Company announced a push to differentiate their connected car offering by providing 4G availability. While most automakers are largely offering connectivity via smart phone integration, GM plans to install a 4G antenna with an option to select a subscription package and connect to the internet across all GM brands. GM plans to build on its expertise with telematics service OnStar to integrate entertainment, information, safety features and diagnostics.

Connected car offers limited threats to Sirius XM Radio
Satellite radio would appear to be most at risk to new offerings in the car as its premium subscription offering could be disintermediated by lower cost services. While we do expect music offerings to get more competitive over time, the analysts do think that Sirius XM Radioâ€™s exclusive non-music deals, strong relationship with OEMs, friction-less billing relationship, and new pushes into smart phones and in-car telematics should help offset these risks to growth over time. However, they see only minor impact on subscriber growth and minimal impact on pricing with those losses being offset by new telematics offerings. Piper doesnâ€™t expect connected car penetration rate to be meaningful until 2018. From valuewalk.com

I didn't know that watching TV was a human essential.

With some of the features that SXM has in the works, it should dovetail in rather nicely with connected vehicles. The Sat 2.0 offerings that we've seen already will make for some nice options while behind the wheel. It will also help people in areas of poor sat reception.


IdRatherBeSkiing said:
I didn't know that watching TV was a human essential.
Click to expand...

IdRatherBeSkiing said:
I didn't know that watching TV was a human essential.
Click to expand...

Keeping a 4G or LTE signal works great in the city, once you get out in the highways away from high population centers not so much. I know huge stretches of I40, 70, 80, 35, 24, etc have piss poor coverage with edge service. Sometimes piss poor cell coverage. 4G/LTE needs a lot of work to become something that truly works everywhere, and plus when everybody gets on it it's gonna slow down. A lot.

blyons200 said:
Keeping a 4G or LTE signal works great in the city, once you get out in the highways away from high population centers not so much. I know huge stretches of I40, 70, 80, 35, 24, etc have piss poor coverage with edge service. Sometimes piss poor cell coverage. 4G/LTE needs a lot of work to become something that truly works everywhere, and plus when everybody gets on it it's gonna slow down. A lot.
Click to expand...

The great majority of the population is located within areas where 4G is growing. If you're out in B.F.E. then yeah, it might take a while, but technology has been passing the small towns by for years, and yet it still works where there are less cows than people. Plus if I read the post right, the car itself is the 4G tower, many cars are coming with 3G, 4G or Wifi so being out in the sticks wouldn't matter a whole lot since you're the transmitter in the car. 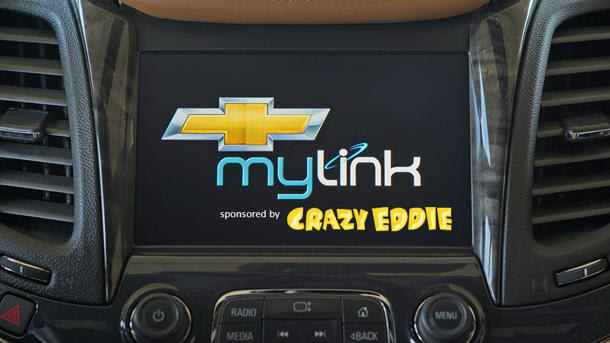 Two months ago, General Motors revealed a new deal with AT&T that would see the nation's largest automaker build in fast cellular data service into most of its models starting in 2015. Today, GM's chief executive supplied his view of what might be possible â€” including the idea that GM could sell Internet ads on its dashboards. Who knew the final frontier in advertising was so close at hand?


On a conference call with Wall Street analysts discussing its first-quarter earnings, GM Chief Executive Daniel Akerson, a former telecommunications executive, played up the potential of building 4G service into vehicles, which in theory could offer enough data bandwidth for everything from streaming ads to mobile video service:

With a 4G pipe into a car, you can change the business model almost entirely. You may be able to have a real revenue generating opportunity into the car with â€“ when you come up for example, what happens if when the logo shows on your screen and its brought to you by Allstate?

Akerson also offered another example of letting children start TV shows in the home, then pick up where they left off in the car, a.k.a. Netflix. As for the business model, GM Chief Financial Officer Dan Ammann said GM would get $20 per connected car subscriber from AT&T, along with a share of revenue â€” much like Apple gets for the iPhone today â€” instead of the zero dollars it currently receives from telecom providers.

Of course, there's a long road to turning GM's OnStar service into an iPhone on wheels, starting with the iPhone itself. Apple and other cellphone builders have designs on making their devices more indispensable behind the wheel â€” which could make in-car systems redundant. Then there's the question of cost and billing; GM hasn't said how much it plans to charge for Internet access, but executives hinted there would be some way for a customer who already had AT&T devices to easily add a GM 4G vehicle to their plan.

The real challenge will be finding the right level of demand. Automakers have dabbled with mobile entertainment before such as mobile TV and failed; the sole exception, satellite radio, has thrived because its a form of media that can be enjoyed by a solo driver. Those rectangular screens we're always staring at do a lot more than the typical displays in the dash of a car. It may take more to break our gaze than a few ads.

Ads on the dashboard is one reason NOT to get a 4G enabled vehicle. You pay them to send you ads?

IdRatherBeSkiing said:
Ads on the dashboard is one reason NOT to get a 4G enabled vehicle. You pay them to send you ads?
Click to expand...

Maybe the ad subsidizes the cost of the 4G semipenguin said:
Maybe the ad subsidizes the cost of the 4G
Click to expand...

Not. The cynic in me says it'll be the same cost with or without the ad. It's the rich getting richer.

It's another thing to look at. Do the various government organizations such as the NTSB, police agencies and whatnot really want people looking at something different? What if there was an ad that was actually compelling? Then again, just get a piece of black paper and cover up the screen and you're good.
You must log in or register to reply here.
Share:
Facebook Twitter Reddit Pinterest Tumblr WhatsApp Email Share Link
Top Bottom